Another of the so-called Hemony bells, this one often said to represent the Children’s Crusade.
Pretty nasty example, possibly one of the newer reproductions from India or Taiwan.
Okay for a filler piece at a cheap price, but there are much nicer examples around.

Wikipedia: The Children’s Crusade is the name given to a disastrous Crusade by European Catholics to expel Muslims from the Holy Land said to have taken place in 1212. The traditional narrative is probably conflated from some factual and mythical notions of the period including visions by a French or German boy, an intention to peacefully convert Muslims in the Holy Land to Christianity, bands of children marching to Italy, and children being sold into slavery. A study published in 1977 casts doubt on the existence of these events, and many historians came to believe that they were not (or not primarily) children but multiple bands of “wandering poor” in Germany and France, some of whom tried to reach the Holy Land and others who never intended to do so. Early versions of events, of which there are many variations told over the centuries, are largely apocryphal. 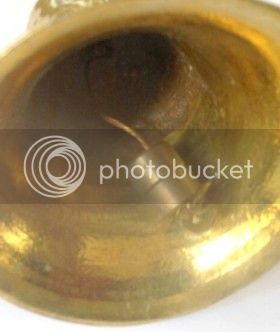 Very interesting style of French doorbell. I have seen several listed, but this one had the best pictures and they are worth seeing. Mechanism is difficult for me to explain, but simple if you would see it. Basically it works like a typical bicycle bell, except that the push motion has to be translated 90 degrees to activate the mechanics.

The figure on the handle is probably Leto and the figures on the base her children Apollo and Artemis/Diana.
The bell is much the same as the Gorham Old Florentine. Seller’s pictures are poor quality.

From theoi.com: LETO was one of the female Titanes , a bride of Zeus, and the mother of the twin gods Apollon and Artemis. She was the goddess of motherhood and with her children, a protectress of the young. Her name and iconography suggest she was also a goddess of modesty and womanly demure. 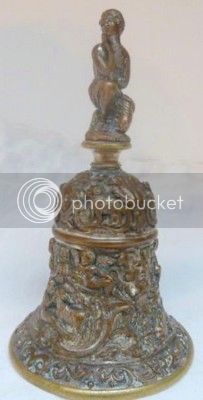