The assembly is made of iron, with some rust as seen in Pic 3. I have seen one previously, and it also had some paint loss, possibly because the casting was not properly primed before the paint was applied. 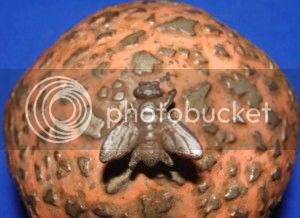 160e – Victorian Sterling Silver Hotel Service Bell
A Victorian sterling silver hotel service bell. Its case with a scrolled design band
to top and bottom that’s also mirrored to ringer. Mounted on wood base.
Condition: Good for age, the ringer is stiff would benefit from a polish and the base has patina loss.
Dimensions: 4.0 in H

Appears to be a squeezer type. Press the two handles together
to wind the mechanism, which will ring when released.

Alexander Ritchie was a boy of twelve when his family moved from Tobermory on the Isle of Mull to Iona, to become the first tenants of the new St. Columba Hotel and adjoining farm. Iona at that time like Mull was steeped in the culture of the Gael. As a young man Alex Ritchie joined the Merchant Navy, but his career was cut short by a serious leg injury after a shipwreck in the West Indies. In many ways, this misfortune turned out to be Iona’s gain. He came home to help run the hotel and in 1898, married Euphemia Thomson.

Euphemia had studied at Glasgow School of Art and together the couple developed a keen interest in design. Alex began by transferring this new interest into the woodcarving he had learned while at sea, but his skill soon expanded into raised metal work, known as repousse, in brass and copper and silver. Euphemia specialised in leather and cloth, creating a variety of beautiful embroidery designs. In winter they regularly attended classes in Glasgow to widen their knowledge of arts and crafts. Their sources included facsimiles of the Book of Kells and Lindisfarne, the complex patterns on the Pictish stones of north east Scotland and, at home, the rich harvest of decorated graveslabs and crosses from a bygone age.

For many years too, Alex acted as guide to the historic buildings and he was thus very aware of the value and significance of the many carved stones harboured there. Countless visitors were enthralled by his stories. A friend recalled, “an active man, a lively wit with a keen almost whimsical sense of the humorous and especially, I think, of his fellow Highlanders.”

As demand increased, production was farmed out to Lawson’s of Glasgow for the brass work, and both Darby’s and Sanders & Shepherd in Birmingham for the silver. A hallmark was registered for “Alex Ritchie, Iona Celtic Art, Iona” on May 9, 1910, in Chester however he did use other hallmarks as well. Earlier marked pieces have been found, although pieces sold on the island itself were not hallmarked. Everything was made to the Ritchies’ specifications and to a high standard. The initials “AR” or “AER” were usually stamped on the reverse – although less often on brass items- and “ICA” was also sometimes used.

In 1937, Alex Ritchie’s work was included in a prestigious Scottish Industries Exhibition on London. The opportunity arose from a contact with the indefatigable Jean Bruce of the Highland Home Industries, who used to scour the Hebrides for examples of fine craftwork. She recognised, no doubt, that here was something stemming from an authentic native tradition.

Indeed, in articles and talks over the years, the Ritchies themselves argued strongly for the greater recognition of Celtic art in Scottish schools and colleges. In the magazine “An Deo Greine” of 1906, they wrote that teaching these ancient forms could be an ideal way to instil the first principles of good design: “At present, examples of Celtic art are as foreign to the Highland child as to the Cockney, even in places where the old monuments can be seen daily.” Yet, they continued, this was “our inheritance, given to enrich our present, mellow from the hand of time, containing all the culture of a wonderful period.” It is small wonder that a later tribute to the couple in the “Oban Times” spoke of their loyalty to “the noble and illustrious traditions of Iona and the Isles.”

Alex and Euphemia died within two days of each other in January 1941 and were laid to rest together in the historic cemetery, burial place of Scottish kings and Highland chiefs. Their shop and its contents passed into the care of the Highland Home Industries which carried on the business for another 25 years or so.