Another item that makes me think, Oh wow, what a neat bell!
A simple but elegant design, or a design that is elegant in its simplicity, however you might view it. The gull looks like it separates into two pieces, possibly easier to cast that way. In total, two iron castings, one brass flick tab, one spring, one bell, one or two screws. Hardly anything to break or wear (yes, the bell has a chip – so turn it slightly and you’re good to go for another 100 years).

I placed a bid, but am not the lucky new owner. If it were mine, this is what I would do. The exterior looks to be in good condition, but there is some light rust on the interior. I would disassemble it, if possible, and clean and polish the brass tab and bell. I would buff the interior and spring with fine grade steelwool and WD-40 to remove the rust, wipe clean, then wipe on another light coat of WD-40. The exterior could be left alone, oiled, or waxed. I myself would use stove polish, a sort of black dye wax intended for cast iron stoves. I would advise against painting it, since the original version was not done that way. 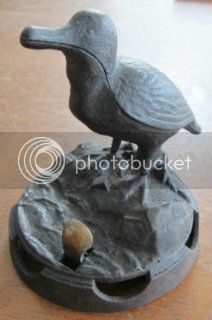 Instead of the “drunken monk” slur, this figure is considered to be Dom Perignon, an early 18C Benedictine monk who made important contributions to the production of sparkling wine – Champagne.

It is rigged as a nodder, bears the marks of the British firm Elkington and Co., is silver-plated, and probably made in late 19C. There are also versions in plain bronze, and some with a gilt finish. There is a somewhat smaller modern Russian version, with the pivot for a nodder but fitted with a standard clapper. Even if rigged as a nodder, it wouldn’t work without modifications because the head is set too low in the base. 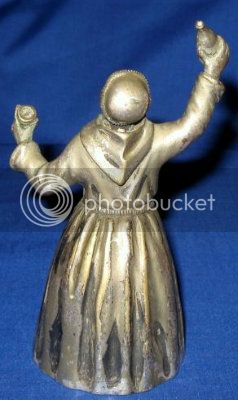 I remember another silver version of this bell, though possibly sterling, that sold for $800 at the 2000 ABA convention auction in Frankenmuth MI. The current sale price seems reasonable, even low, for this uncommon bell. It is encountered much less frequently than the following Mother Hubbard.

Another of the “Mother Hubbard” figures, the most often seen nodder. It is properly rigged as a nodder, and seems to have no missing parts.

This one, however, is somewhat of a mystery to me. The seller does not say, but from the pictures it seems to have a gilt finish or possibly bright brass. The dark blue backdrop of the photos may confuse the camera’s color perception. Even if the silver had worn off the exterior, you would expect to see more on the interior. The shield mark looks like Elkington, but I cannot read the top left letter. I was not aware that Elkington made anything other than silver plate. I have a silver-plated Elkington Mother Hubbard, and it is marked like the previous Dom Perignon. Perhaps someone else has more information.